Last year I blogged about getting detailed diagnostics from iOS using a proxy. With iOS 8, Apple has significantly improved the detail contained in the diagnostic dump. Gone is the text file and in comes a sqlite database containing about 100 tables. This will make analysing the data much easier. Furthermore, the tables give us a clearer indication of what data might be available. We’re going to use SQL to extract and process the data and see what we can tell. So head over to here and get your data.

I’ve tried to detail some of the things I’ve found below. However, my real motive was to provide a way of finding out what was using draining the battery on my iOS devices. We’ve all had the scenario where we’ve not really used our devices but the battery has mysteriously run down. To this end I put together a quick python hack that generates a report from your diagnostic database. You can find the tool here. I plan to add more sections in the coming months. You can find an example report here taken from my iPhone . In the time period shown the battery had been draining, but I had not been using it. The report shows that I was getting lots of push notifications concerned with the key value store. If I connect my iPhone to the Charles Proxy I can see it’s constantly posting to keyvalueservice.icloud.com. Presumably in response to a push notification telling it something has changed.

We can extract time and level using the following SQL:

We can use this to make a nice graph of how batter level changes over time: 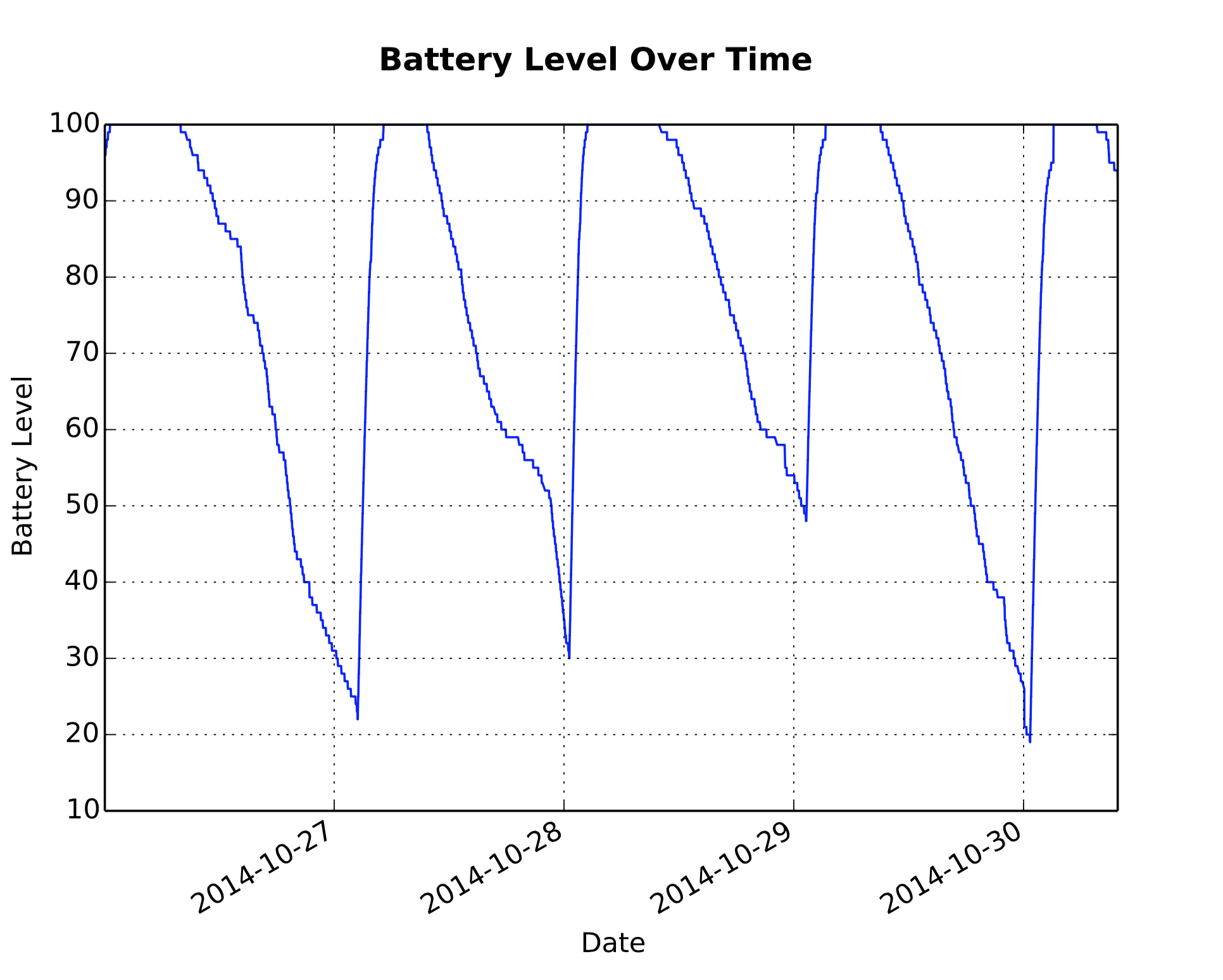 There is wealth of energy diagnostic information kept by iOS. The table PLIOReportAgent_EventBackward_EnergyModel seems to take a snapshot of power usage broken down by CPU, DRAM, GPU, SoC Energy. Much more interesting is the table PLBLMAccountingService_Aggregate_BLMAppEnergyBreakdown which contains, on a per app basis, where the energy is being used. It’s broken down into fields such as: Airdrop, AirplayMirroring , BLMEnergyDisplay, BLMEnergyGPS, BLMEnergyGPU, BLMEnergyPA_accessories, BLMEnergyPA_apsd, BLMEnergyWiFi, BLMEnergyTorch. Samples appear to be on an hourly and daily basis. I would imagine this table is used to populate the energy breakdown you can get in the Settings.app. This really is a treasure trove! For example, you can tell which apps used location in the background. The times are on hour boundaries:

These tables are a good place to see which apps and internal processes are using power. Note that some of the columns always seem to be 0. You can see overall energy per app per day:

When the device was sleeping and awake:

You can do a similar thing for the front camera and the torch/flash.

iOS keeps track of which apps ask for location and how long they use it for, and the desired accuracy. Note the actual location is not recorded! The following SQL will show you the total number of location requests per client.

The biggest user for me was com.apple.locationd.bundle-/System/Library/LocationBundles/Routine.bundle which belongs to the process routined. I think routined is the frequent locations service i.e. the one that tells you in notification centre how long it will take to get home. You can see what’s being stored by looking in frequent locations in Settings -> Privacy -> Location -> System -> Frequent Locations.

It would appear iOS logs when each push notification arrives. This includes the silent background ones too. It includes which push server you were connected to, and whether you were on Wifi on Cellular. There appears to be a priority fields, but I’m not sure what that’s used for. The following SQL will show you the total number of push notifications per app/service (Apple refers to these as topics)

See when apps are doing some background processing:

iOS appears to sample how much processing time each process gets. The sample length seems vary from sample to sample:

or see the total processing time for each process:

The following SQL will show you your signal strength at each recorded time point:

Find out the different kinds of power assertions:

Find assertions relating to background tasks. The assertion will often contain the name of them method being called:

Overall, I think the fact that Apple is collecting these kinds of metrics is a good thing. It will allow them to better understand how customers are using their devices, and thus draining their batteries. I assume that this data is only harvested when you go to the genius bar and they run through the diagnostics app with you. However, I could be wrong and it could be part of the standard Diagnostics and Usage data collections.