I was poking around in the iOS6 private frameworks over the weekend and found some interesting battery related stuff. I’ve put together a quick and dirty app which displays most of the interesting stuff. You can get it on github here. Being ever so fashionable I only support iOS6. Plus, it doesn’t work on iOS5! 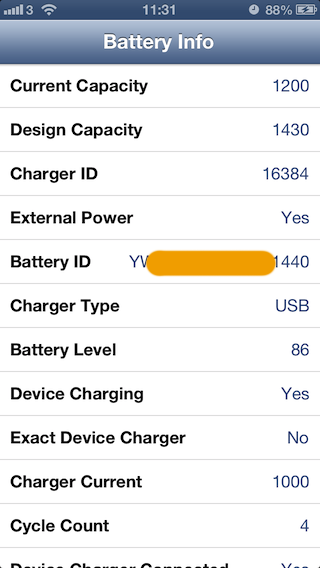 It goes without saying that you can’t submit an app using this code! It’s a private framework. Don’t be an idiot. I’m not sure how useful all of this is. I’d quite like to run the app on a refurbished device to see what is says. I’m also not clear as to where exactly the count is stored i.e. in the battery or on device. Maybe the iFixit guys can swap batteries in a device and let me know?